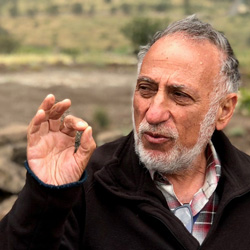 MORE INFORMATION ABOUT YOUR EXPERT TOUR EDUCATOR
Mike Rogoff was born, raised, and educated in Cape Town, South Africa, moved to Israel in 1970, and spent a brief period studying Hebrew and milking cows on a Kibbutz. He completed a teaching diploma at Tel Aviv University, but his joyful experience in informal education persuaded him that the entire Land of Israel was a far more fascinating classroom than any four walls could ever be.

Mike became a licensed tour guide in 1974, and after more than four decades in his calling, he has lost none of his passion for the job. In 1983, the Ministry of Tourism honored Mike with the "Guide of the Year" award. He has been sent to the USA and the UK many times by Israel's Ministry of Tourism to lecture on tourism to Israel and promote it.

When he’s not guiding, Mike enjoys writing and translating, and has been a senior writer for Fodor's Israel since 1984.

Mike is married to Jill, a professional singer, and they have two adult daughters and three young grandsons, all currently living in Jerusalem.