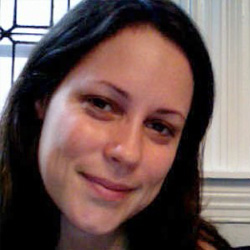 MORE INFORMATION ABOUT YOUR EXPERT TOUR EDUCATOR
Hillary Menkowitz grew up in the Pennsylvania suburbs of Philadelphia and spent her college years and half of her 20’s living on the Upper West Side of Manhattan. She was first introduced to the world of informal Jewish education at Camp Ramah in the Poconos and in her late 20’s, she volunteered with several Birthright trips.
From the time she made Aliyah in 2008, Menkowitz knew that she wanted to become a tour guide and Israel educator, and began the Tour Guide Course almost immediately after moving to Israel. Her previous career as a graphic designer allowed her to make a living while studying and supporting herself throughout the professional transition.
Menkowitz obtained a bachelor’s degree in Anthropology from Barnard College, Columbia University and an associate’s degree in Graphic Design from Parsons School of Design. Her background in anthropology informs and expands her understanding of history, religion, archaeology, and culture, while her lifelong love of art and design helps her connect her travelers with architecture, street art, and public works of art. She takes special pleasure in guiding where nature, history, geopolitics and/or religion combine in a fascinating way that seems only possible here in Israel.
Since becoming a tour educator, Menkowitz has guided Jewish Federations, young professionals, Jewish youth, multi-generational families, and Birthright groups.
Although fairly integrated into Israel society, a huge part of Menkowitz’s identity is firmly rooted in North American diaspora Jewry. "I believe this is an asset to my role as a tour guide and educator because I share the North American Jewish experience with my travelers and in this way can serve as a kind of a bridge in helping them connect to the land, people, and modern state of Israel," she says.
When not working, Menkowitz enjoys staying active, traveling to new countries, and visiting her family in the US. She also loves to read, explore Israel on her own, and work on her art.

(**Reduced rate for a child as a 3rd in a triple room will only be applied if the child is under the age of 18.)

To connect with a Da’at representative, please provide your name, phone number and e-mail as noted below: