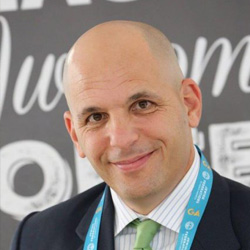 MORE INFORMATION ABOUT YOUR EXPERT TOUR EDUCATOR
Gilad Peled is committed to exploring Jewish identity and shared connections through travel in Israel and the Jewish world. He enjoys meeting new people and helping them feel part of the Jewish family. A wonderful storyteller, Gilad explains Jewish history and traditions in an engaging and enlightening way.
Born in Israel, Gilad grew up on a Kibbutz. He served for four years as a combat officer in the IDF and then as an Israeli emissary in Minsk, Belarus.
The experience of helping youth connect to their Jewish roots and identity was one step in Gilad's investigation of his own. Later, working as a tour guide in Israel inspired him to expand his knowledge, and he obtained a bachelor’s degree in Archaeology and Jewish Thought from Hebrew University. Another passion of Gilad’s, the history of Jewish life in Europe, encouraged him to guide groups in Eastern Europe and to complete a master's degree in the history of Jews in Poland.
A longtime dream to combine his vast knowledge about Israel with his deep commitment to Jewish education brought Gilad to Rome, where he served as an Israeli emissary to the city’s Jewish community.
A spiritual person, Gilad loves to travel and explore. Europe, which is not only rich in Jewish history, but was home to his grandparents and many family members, holds a special place in his heart.
Gilad is married to Inbar and is a father of two.

To connect with a Da’at representative, please provide your name, phone number and e-mail as noted below: