It’s Time:
Discover the Essence of Israel
With Uri Feinberg 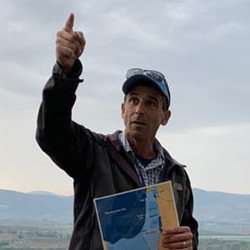 MORE INFORMATION ABOUT YOUR EXPERT TOUR EDUCATOR
Emigrating from the US with his family when he was 10, Uri grew up in Jerusalem, served in the IDF and traveled the world. He graduated from the Hebrew University of Jerusalem with a master’s degree in Contemporary Jewish Studies. He also holds a bachelor’s degree in History and English Literature and has been a licensed tour guide since 2000.
Uri has guided teen trips in Israel, worked as a Jewish history teacher for semester programs in Israel, as a guide in Jewish heritage journeys in Europe, and as a tour educator for families, adults of all ages, synagogue groups, and specialty tours throughout Israel. In 2010, Uri, his wife and three daughters returned from three years in Boston, MA, where he served as the Director of Education for Temple Israel, Boston. He has also lectured across North America on Jewish history, the history of the State of Israel, Jewish identity and education.
After returning to Israel, Uri worked with Da’at and served as an in-house educator in the field of program development and educational innovation. Since he has returned to full time guiding, all of his work continues to be through Da'at.
Uri’s experience has been driven by a clear desire to share the power of the Land of Israel. As he uncovers the layers of history and presents the wonder of the modern state, the story becomes increasingly relevant to visitors. Uri allows himself to be inspired as well, both by the sites that are re-visited and by the people with which he visits them.
When not guiding, Uri enjoys spending time with his family, hiking and mountain biking (although once in a while he is more than happy to just hang out at home).